EU-DEM is an elevation dataset covering Europe at a 25 metre resolution.

The dataset was created by merging elevation data from the SRTM and ASTER global datasets, as well as from Soviet topo maps at high latitudes. The datum used is EVRS2000.

The dataset covers European Environment Agency member states, plus some countries to the east. Coverage extends to small parts of Northern Africa. Unlike SRTM, EU-DEM includes the Scandinavian regions north of 60°. 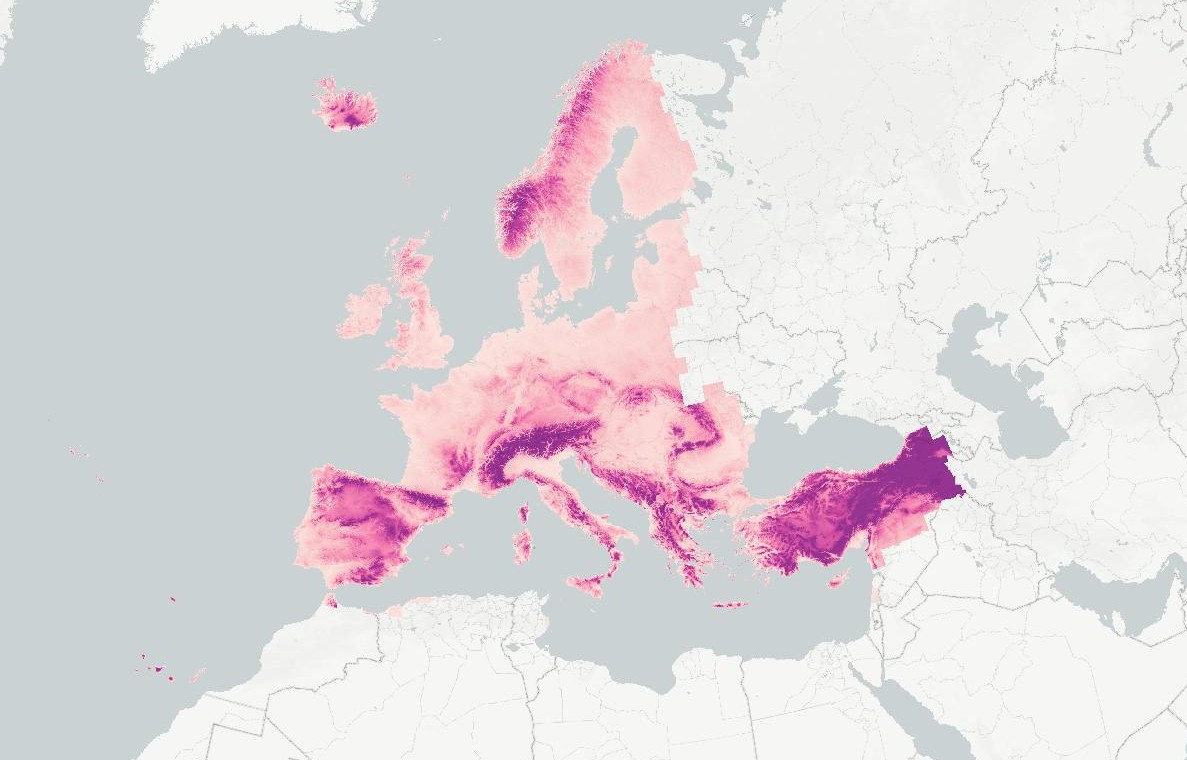 The stated vertical accuracy is ± 7m RMSE. Differences to SRTM and ASTER typically fall within this 7m range even with the datasets using slightly different vertical datums. Elevations for Lake Geneva, Switzerland are 370m, 374m, and 372m for SRTM, ASTER, and EU-DEM respectively.

EU-DEM uses NODATA values for elevations over seas and oceans, where both ASTER and SRTM assign these areas an elevation of 0m. This means that Open Topo Data isn't able to interpolate elevations for locations very close to the coast and will return a value of NaN in places where SRTM and ASTER might return a 0m or 1m elevation.

The advantage of the NODATA oceans is that you cane use EU-DEM without clipping to a coastline shapefile.

Make a new folder for the dataset:

Download the dataset from Copernicus. There are 27 files. Unzip them and move all the .TIF files into the data folder (you don't need the .aux.xml, .ovr, or .TFw files).

Your data folder should now contain only 27 TIF files:

If you have gdal installed, the easiest thing to do here is build a VRT - a single raster file that links to the 27 tiles and which Open Topo Data can treat as a single-file dataset.

The tr, tap, and te options in the above command ensure that slices from the VRT will use the exact values and grid of the source rasters.

Then create a config.yaml file:

If you don't have gdal installed, you can use the tiles directly. There are instructions for this here, but because the EU-DEM tiles don't come with an overlap you will get a null elevation at locations within 0.5 pixels of tile edges.

The tiles provided by EU-DEM don't overlap and cover slightly less than a 1000km square. This means you'll get a null result for coordinates along the tile edges.

The .vrt approach above solves the overlap issue, but for improved performance you can leave the tiles separate and add a buffer to each one. This is the code I used on the public API to do this:

These new files can be used in Open Topo Data with the following config.yaml file

Access to data is based on a principle of full, open and free access as established by the Copernicus data and information policy Regulation (EU) No 1159/2013 of 12 July 2013. This regulation establishes registration and licensing conditions for GMES/Copernicus users. Free, full and open access to this data set is made on the conditions that: