If you're self-hosting Open Topo Data and want better throughput or to run on a cheaper instance there's a few things you can do.

A spinning hard drive is enough to saturate the CPU so an SSD is not needed. Using a network filestore or keeping tiles in cloud storage will probably introduce enough latency to become the bottleneck.

Batch request are faster (per point queried) than single-point requests, and large batches are faster than small ones. Increase max_locations_per_request to as much as you can fit in a a URL.

Batch queries are fastest if the points are located next to each other. Sorting the locations you are querying before batching will improve performance. Ideally sort by some block-level attribute like postal code or state/county/region, or by something like round(lat, 1), round(lon, 1) depending on your tile size.

A request spends 90% of its time reading the dataset, so the format your raster tiles are in can greatly impact performance.

The most optimal way to store rasters depends heavily on the dataset, but here's some rules of thumb:

Add tight wgs84_bounds for multiple datasets. If your dataset isn't a filled rectangle (e.g., you have one dataset covering CONUS, AK, and HI but not Canada) you might want to split it into multiple datasets with tight bounds.

Open Topo Data gets faster each release, either though performance improvements or from updated dependencies.

Use the latest version.

This is especially true if you're using a version older than 1.5.0, as this release gives a 2x+ speedup.

You should test on your particular dataset and batch size. It doesn't seem to matter much if you use a fixed url or build a list with different urls for each request: there's no response caching (though your OS may cache files and GDAL may cache raster blocks.)

Here are some plots I made benchmarking version 1.5.0 with 8m NZ DEM. The specific results probably won't apply to your dataset, and I included the general takeaways above. 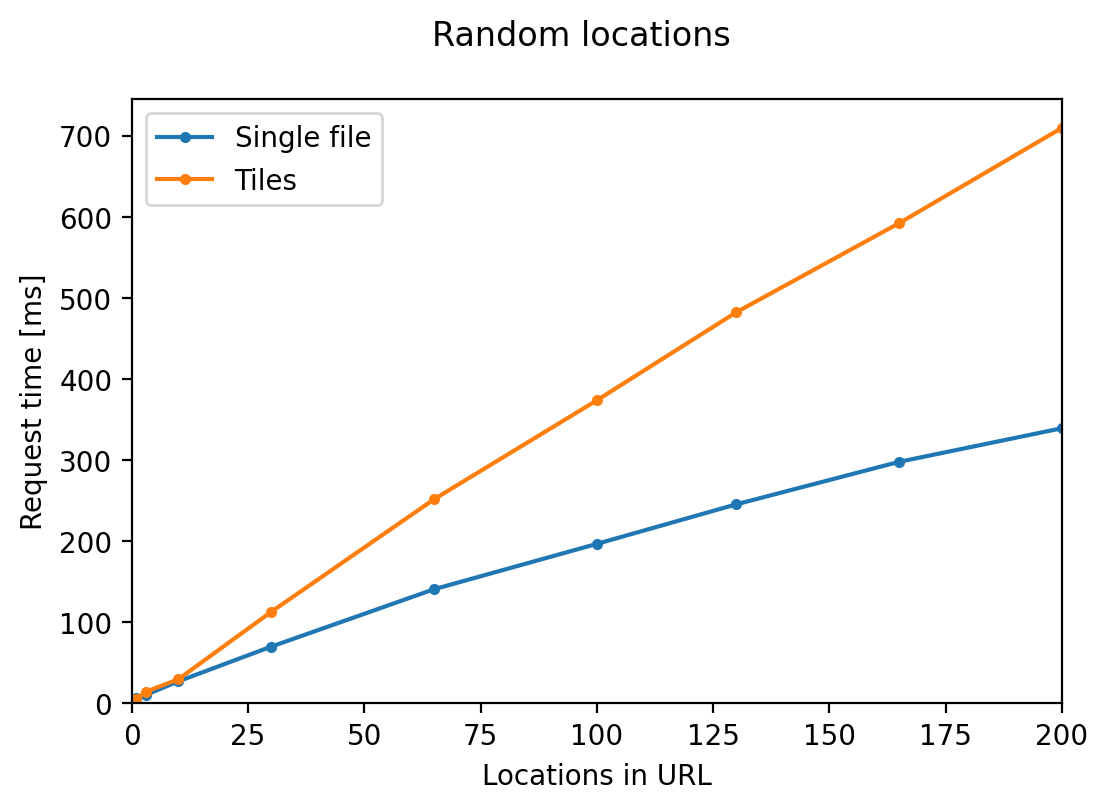 Response time grows sublinearly with batch size. Querying locations that lie on the same tile is 2x faster than locations over multiple tiles.